Disclosure: Some of the links below are affiliate links, meaning, at no additional cost to you, we will earn a commission if you click through and make a purchase.. 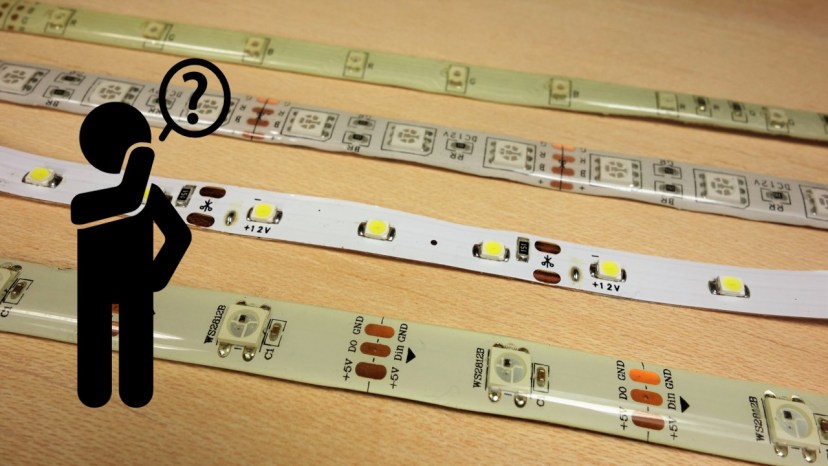 LED strips are just amazing, and there are a wide variety of LED strips to chose from. Do you know what is the best LED strip for your project? Here we explain the main differences between several types of LED strips and their features.

Besides being analog or digital, LED strips also vary in a number of aspects:

The waterproof version is easier to work with as they have more weight, are more flexible and can be easily placed outside. However you should be aware that these shouldn’t be placed inside pools, or in places where they will be subject to agressive weather conditions.

The non waterproof strips are lighter, so it is easier if you want to hang them on the bottom of something with tape. The image below shows an example of a non waterproof LED strip.

Usually, LED strips come on reels with several meters long and can be cut into small segments.

There are cutting marks along the strip marked with a scissors icon that shows you where you can cut your strip as shown in the figure below. This strip has segments of three LEDs.

To find out the current you just need to multiply:

When it comes to analog strips, there are analog RGB LED strips and monocolor LED strips.

Monocolor LED strips only produce one color. These strips are really easy to wire, they just have two terminals: GND and VCC as shown in the strip below.

You just apply power to the strip, and the LEDs light up. The following figure shows an example of a monocolor LED strip. This strip only produces white color.

Analog LED strips have their LEDs wired in parallel. The whole strip works as a giant RGB LED. So, you can light up your whole strip in many different colors, but you can’t control LEDs individually. This means your strip can only be one color at a time. This type of LED strips are cheaper than the digital ones and easier to use.

Analog strips are more used in decoration purposes. But it really depends on what you intend to do. We use an analog strip to give some color to our recording setup. In the following figure, the background color was set to cyan.

These strips have four pins you need to connect. One red channel, one green channel, a blue channel and power.
To produce different colors you just need to vary the amount of power to each channel.

This is easy to control with any microcontroller using PWM. Whether is using a Raspberry Pi, an Arduino or an ESP8266, you can easily control the LED strip brightness and color.

One meter of your analog LED strip can draw approximately 1A per LED pin when all red green and blue LEDs are at full brightness (which produces white).

You need a driver circuit to boost the power – add a transistor amplifier in each control line. For example, you can use N-channel MOSFETs like the IRLB8721 that work with 3.3V and 5V logic. So, they are suitable to use with your Arduino or ESP8266.

Then, you can control the strip with PWM as you would do to control a single RGB LED. To find out how to control an RGB LED with the Arduino you can read: How do RGB LEDs work?

When it comes to digital LED strips, you can control each LED individually – these are also called addressable LED strips. You can chose each LED color, its brightness and when they should be on and off. This allows you to do all sorts of crazy and awesome effects. Our favorite addressable RGB LED strip is the WS2812B. Here’s some of the effects you can do with it:

The WS2812B LEDs have an IC built right into the LED – take a look at the figure below.

This allows a communication via a one-wire interface. This means that you can control lots of LEDs using just one digital pin of your microcontroller. These LED strips just have three pins: VCC, GND and data. VCC and GND are used to apply power to the strip and the data pin should be connected to your microcontroller.

This strip requires a 5V data signal, so you should have no problem controlling it through an arduino digital pin. However, if you want to control your strip using Raspberry Pi, or ESP8266 that send signals at 3.3V, you should use a logic level converter module that converts 3.3V data signal into a 5 V data signal.

There are libraries that make it really easy to control the strip and make all sorts of crazy effects.

Now that you know what is the best LED strip for your project, you can go to Maker Advisor to find your strip’s best price.

You can use the preceding links or go directly to MakerAdvisor.com/tools to find all the parts for your projects at the best price!

In this post we’ve shown you the main differences between the various types of LED strips out there.

Now, it is easier for you to pick up the right strip for your specific project.